Actions are operations exposed to the flow builder that can be placed in any step except the first step of a flow.

Triggers are operations exposed to the flow builder that can only be placed in the first step of a flow.

Both action and trigger objects in component.json have similar structures however there are small differences between them which are described in this article.

Each key-value pair in the object represents an action or trigger that is exposed. The string key acts as the identifier for the action/trigger.

The structure used to describe each action or trigger is described below. 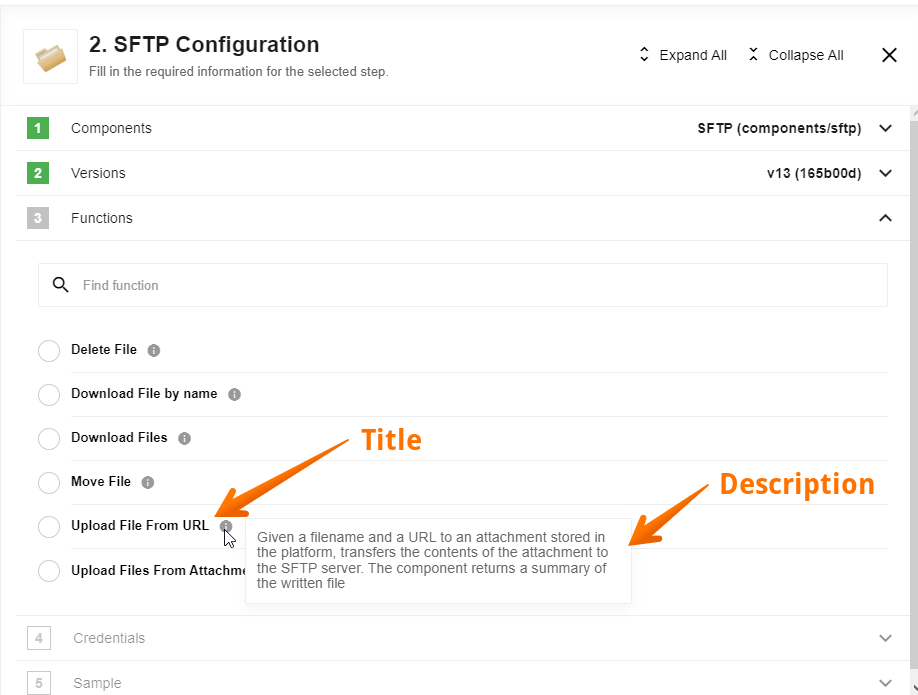 Used to signal that this action/trigger should not be used in new flows and that existing flows should migrate to a different action/trigger.

Identifies the code entry point for the action/trigger.

In the case of JavaScript components, the code entry point is identified as a path to a .js file which contains the code for the action/trigger. This path should be relative to the root of the component.

In the case of Java components, the code entry point is identified as a fully qualified Java class name which implements the logic for the action/trigger.

Identifies the type of trigger. There are two options: polling and webhook.

The fields object describes the flow specific config fields that need to be configured for the action/trigger.

To learn more about the required structure for this object, see the dedicated article on the fields object for more information.

More information on the metadata schema structure can be found in this article.

These two properties indicate how the component will communicate to the platform the expected structure of incoming and outgoing messages.

There are three options for how the message structure is communicated:

If the action/trigger uses dynamic metadata, then

Some examples when dynamic metadata is used include:

When dynamic metadata is used, once all required configuration fields for an action/trigger have been submitted, then the platform will call component code to learn the metadata.

Whenever a config field is edited, the metadata will be refreshed.

If the action/trigger uses static metadata, then

Some examples when static metadata is used include:

There are two possible formats for static metadata:

If the action does not expect incoming messages to be transformed by the platform’s built in mapper, then

Some examples when no in metadata is used include:

When No In Metadata mode is selected, then there will not be a mapping step between this component and the previous component.

(Example of action object implementation in the component.json)