An integration Flow is an automated workflow used to synchronize data between multiple applications or services. Typically a flow consists of following steps:

A Flow is constructed from a set integration components that are invoked in a predefined order. The components within a Flow can be classified into two groups: triggers and actions, as shown in the following diagram. 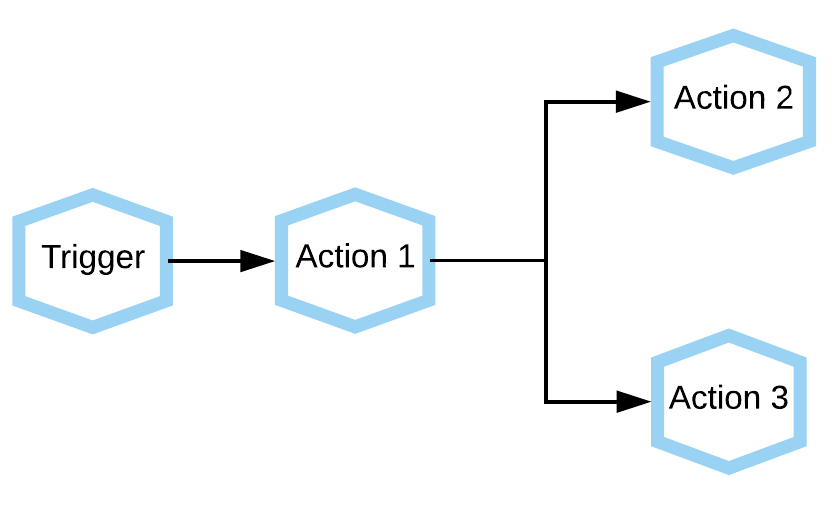 In the diagram above you can see that the first component of the flow is always as trigger. A flow can have a single trigger only. All the other components of the flow are actions.

The Platform can be configured to show handy help links to the corresponding documentation in the process of creating an integration Flow:

A flow is always started by a trigger component which used to monitor changes in the source application. For example, a Salesforce trigger monitors insertion of new objects or changes to existing objects in Salesforce and starts the integration flow once a change is detected.

There are two types of triggers:

The difference between polling and webhook triggers is how the changes are detected. A polling trigger is actively querying for changes in predefined intervals, for example every 3 minutes. In each polling iteration a polling trigger retrieves either new objects or updated objects since the last polling iteration. For that purpose polling trigger typically maintains a timestamp in its state. More details on polling flows can be found here. In contrast, a webhook trigger is triggered by the changes in an external system. For that purpose a webhook flow registers a unique URL in the source application and wait to be notified about changes. More details on webhook flows can be found here.

The data produced by a trigger are sent to an action for consumption. For example, a new object from a Salesforce trigger is sent to a Quickbooks action for insertion or update. After consuming the incoming data an action is producing new data which can be consumed by the next action. Typically the response of the API the action is talking to is sent to the next action. Upon an insertion or update most APIs responds with the new object containing the internal ID or the updated object.

Both triggers and actions can be referred to as flow’s steps. Each step of an integration flow is running as an individual Docker container. All the containers a connected through a messaging queue, as shown in the following diagram:

Using a messaging queues between flow steps has following advantages:

The main Flow states are:

Additionally, there are two intermediate states, which cannot be changed manually, and will go to the next state after some time:

A Flow in Inactive state is not working. No messages are sent, no triggers or actions performed, no containers running. From this state, a Flow can only be run, going from Starting to Running. Note, that a Stopped Flow cannot be Suspended.

A Running Flow is operating as designed. Containers are running, triggers and actions are performed. From this state, a Flow can be Stopped or Suspended, going through corresponding intermediate states. Additionally, a Running Flow can go into Sleeping state.

A Sleeping Flow resembles a Stopped Flow in terms of activity, but it is actually just paused, because the Flow has done all the work. In this state, the Flow is waiting for a trigger from a Webhook or Scheduler to resume work. Sleeping Flows go to Running state without the intermediate. Also, they can be Suspended in rare cases. Sleeping state only works for ordinary Flows.

Suspended is a state caused by Flow exceeding its message number or size limit in RabbitMQ queue. Suspension is more of a pause, than a stop. All non-processed messages in a suspended Flow are saved in RabbitMQ queue for a limited time. Then they get dropped if the user did not fix the issues and did not resume the Flow. In limited workspaces, Flows are stopped instead of being suspended. A stopped Flow doesn’t save any non-processed messages - everything is dropped. You can stop a Flow manually by pressing the Stop button. Please, keep in mind that stopping a Flow drops all unprocessed messages at the moment of stopping. A Suspended Flow can go to Running or Stopped states.