With this release we introduce a new API endpoint (/stats) for the contract owners to collect statistical information including the number of workspaces, flows and the component used in the flows.

Use the following call: GET /v2/stats/workspaces?{contract_id}, where the contract_id is the ID of your contract. Your contract ID is the alphanumeric number found in your browser address-bar after the letter c/ and before /w while you are logged-into the platform.

Our platform stops flows in the limited workspaces. We describe this in our Contracts and Workspaces general article. With this release you will receive notification when the platform stops them. You can still login and restart your flows.

With this release we improved the behaviour of the branch creation and modification while working with the Content Based Router component. To avoid confusion and standardise the experience the following changes were made: 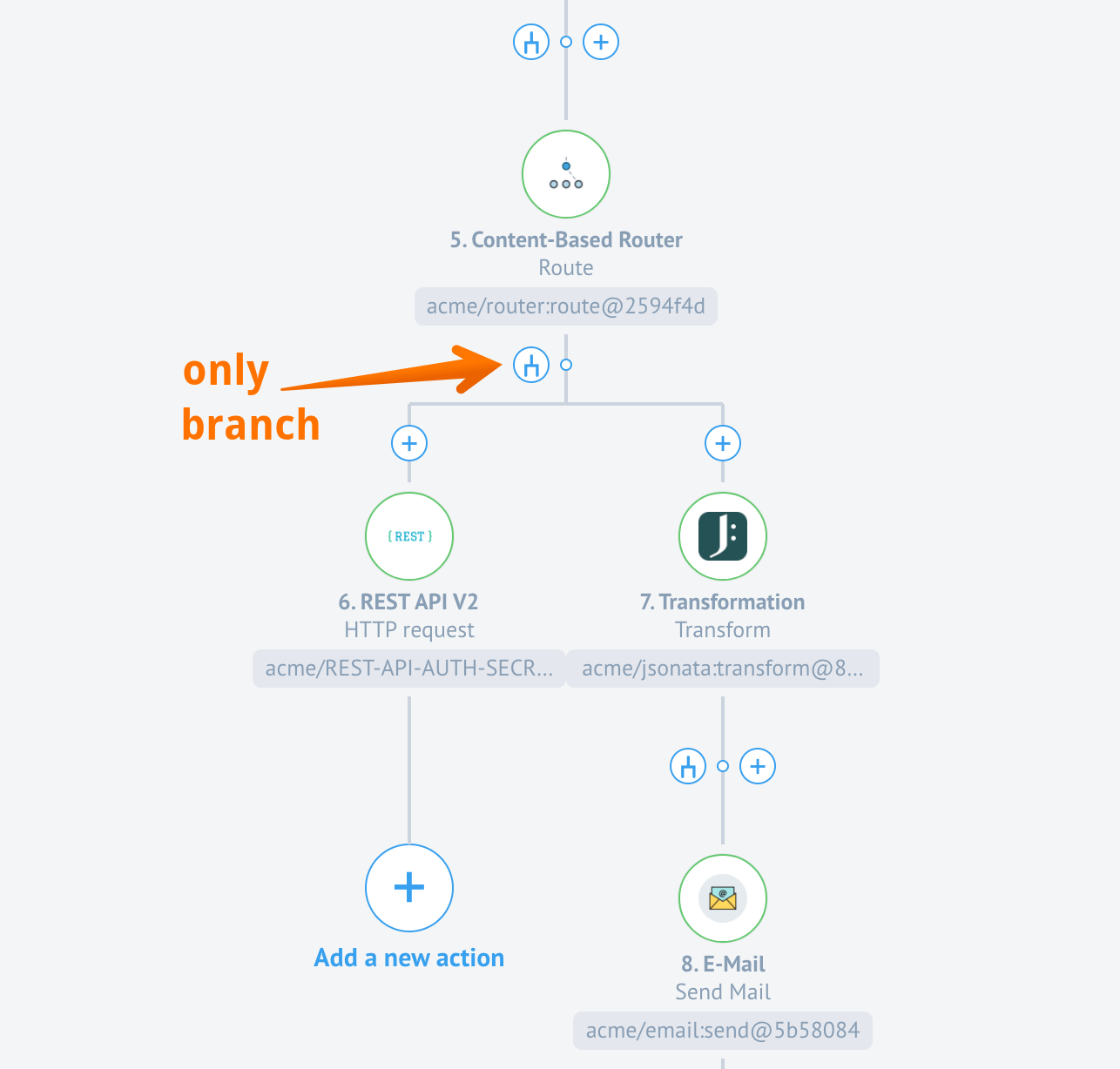 With this release we introduce next sets of improvements to the Node.js Sailor, the base library used to compile any Node.js based component code during the platform deployments.

This particular update includes stability for large message (~50MB) processing through the request-reply chain. If you intend to include your custom component in the request-reply scenario, we highly recommend updating the Node.js Sailor to at least 2.6.24 version.

Along with this new improvement the Request-Reply (HTTP-Reply) component is updated. We recommend using at least 1GB RAM memory on the HTTP-Reply component and at least 512MB RAM memory for each step in your request-reply chain.

With this release we introduce next sets of improvements to the Java Sailor, the base library used to compile any Java based component code during the platform deployments.

With introduction of the the version 3.3.2 all errors in component credential verification are shown in the UI as errors. Previously errors were shown in the logs only.

With this release we standardised behaviour of the UI in the mapping fields. Some notable improvements are:

As a part of HA of our Clickhouse service, a migration of Bran service is required. Here are the detailed migration instructions necessary to go with the current release.

Note you must have tenant Administrator role to benefit from this feature.

With the introduction of a new API endpoint /stats, the tenant Administration can get the an extended statistical information about all the workspaces, flows and the components used in the flows for the entire tenant.

Use the following call: GET /v2/stats/workspaces, to get the statistics. You don’t need to include the contract_id like in case of the contract unless you need the statistics of one specific contract where you are the owner as well.

Please use this call with care. This call can potentially be heavy for the DB if you have many customers in your tenant.

Note: These changes are included in the 21.06.1 release

Tenant admin can see all the workspaces in any contract of the tenant using GET /v2/contracts/[:id] API endpoint without being the member of this contract.

In addition tenant Administrator can get all workspaces and the members in these workspaces using the GET /v2/workspace/[:id] API endpoint.

Note: We have implemented paging on these endpoints for the UI. Every time only 20 records will be shown. You can use the link load more to see more records.

Tenant admin has now access to all developer teams in any contract using the GET /v2/teams[:/id] API endpoint. A new permission contract.devTeams.get is added.

Tenant Administrator can now retrieve quota data from any contract or workspace in the the tenant via the GET /v2/quota-usages/ and GET /v2/quotas/:quota_type/:context_expression/ API endpoints.

Tenant Administrator has now access to POST/PATCH/DELETE /v2/teams/{TEAM_ID}/relationships/members API endpoints as owner of the contract. With these right the tenant Administrator modify (add or remove) members in the developer teams.

As a part of the component code audit we updated the Node.js Sailor version to 2.6.24 in the following components: